This Day in July

Certainly, it was the most delightful day of this month of July.

A blue, blue sky ... with just a very small frizzed white cloud to form a real contrast and interrupt the monotony of the canopy of heaven.

A round, round sun ... of pretty pale red color, the rays of which were just gleaming enough to make you feel pleasant but not too hot ...

As for the pool, it was a dream ... its water was so clear and so pure that it was really completely strange to think that its bottom was seven feet deep. The whole bed of it was covered with white stones and small round pebbles of all the colors : pink, green, yellow ; they were sometimes sparkling by the sun so much that you thought that they were blinking to you. The great big water-lilies had never seemed so bright and gay. On the banks of the pool, the flowers were dancing, so light, dancing in the grass, following the rhythm of the breeze, and the good old birch tree smiled paternally to its little friend, shaking slowly its leaves to invite her to sit down in its shade.

This wonderful pool ... ; it had always been her favorite spot.

She liked to corne here and spend her leisure time sitting on the steep bank ; she always carried with her an apple or some other fruit — and a fairy tale book. But every time it was the same thing ; she forgot all about eating or reading, being unable to take her eyes away from the steady water.

It was such a strange pool ...

Oh ! How can it be explained to you ? Ann thought it was just impossible to explain that to anybody, because this came in a kind of magie way.

You see — when you were sad, the pool would console you.

It was an astonishing pool, I told you. Ann had an unbounded trust in it. It was her confidant, her protector, her friend. It comforted her when she was sad, and each time she felt sorry, she came to tell it the painful feelings she had in her mind — Ann had elected it to the grade of friend the first day she arrived in Fontenay castle ; that was four years ago — and since that time, she came to pay visits to it as often as she could.

When you live alone in a big dark castle — alone with a charming Daddy, charming, but always sad, so sad — with no friends except the fat old maid called Joan who did not let you bother her all day long — when the next town is about ten miles away from your own home ...

Then you have to manage yourself. At eight years old, you care a lot for friendship and comfort.

So the lovely pool was little Ann's best friend.

She liked it so much. She was just crazy about it—and not only about its charming banks and the shining white nenuphars on the small waves, or for the daffodils or the lilies or the daisies —

But above all for its magic power of consolation !

You see, when you felt sad, you came to it — you just had to sit down on the bank near the old good birch tree, and the comfort came ... the great big black troubles toned down ... grew more and more pale, went deeper and deeper ... deeper even than the depth of the pool ...

Then you began to feel less sad, less squeamish about the old grown-up people, less angry about their odd ideas ...

And then there was the time when the enchantment was working. If you go on and look obstinately always and always at the same place ... then you felt a smooth quietude invading your mind. Your taut face starts to relax. On your mouth is sketched a semblance of a smile and ...

And you see some little white and pink clouds up above the daffodils of the bank. Then you know that the surprise is going to happen. Because, behind the little white and pink clouds is usually hidden a surprise — and when you start to see the clouds, you feel glad because you are so anxious to see what is hidden behind them — and it is always something agreeable that makes you happy and forget all about your last sorrow.

Sometimes, the clouds hide a tiny grey castle rising in the sky, with a great army of red soldiers inside, firing and screaming — sometlmes you see behind them the prettiest Scotch doll ... sometimes they hide a brown horse, pawing the ground and dealing heavy blows in a wonderful way.

But the most interesting part of this is that you can never know what will happen next time behlnd the clouds ... a darling kitten ... or a smiling baby ... but you are always sure that it will be something agreeable.

It was a pity that when the dinner bell rang, the white and pink clouds used to hide immediately the apparition, then vanish little by little ...

And after a certain while, it was really nothing else than the shadow of the poplar trees behind the daffodils.

It was really a pity — but the feeling of contentment and welfare would remain, and you came back among the human beings entirely consoled, with a better opinion of them.

Well, now, that is the way it was usually :

You felt sorry ; you came near the pool ; and you came back home with a happy mind instead.

But this particular day, this delightful day of July, Ann had never before had such a terribly broken heart. She would have rather cut her hand very deeply with the great big kitchen knife — even if the blood had to come out of her hand in a very fast run— she would have liked that rather than to have this sorrow in her heart. It was too much for her. And this time, she thought, nothing and nobody would be able to console her.

She sat down on the bank slowly. She shook her long, brown, tangled, hair, and put in a familiar way her hands around her legs. Her clean yellow dress would be rumpled and Joan would be angry with her, but she did not mind. She wanted to sit down and look at her dear pool ... look at it again and again ...

For this was the last time.

Voraciously, her eyes went around the landscape. She tried to store in her memory all that she could, all, even this curious light spot on the old birch tree. She had never paid any attention to this light spot before, but now it had a real friendly meaning for her …

She wondered how she would ever be able to enjoy life so far from her one friend.

The school ! Why the school ? That was another invention of the grown-up people !

Why going to school ?

"To be a learned person," so had said Daddy.

And Ann had looked at him with a very astonished face.

Oh ! God ! the school ... the noise ... the other human beings, the old grown-up people ... so many things which were unknown and probably terrible to learn ... black aprons, well-twisted hair, a sad appearance of a town-child ...

Maybe never being able to see the pool ...

Suddenly she realized better what it did mean — the contrast between the still sparkling water running steadily at her feet made terrible the thinking of the word "school."

Ann always looked fixedly straight forward. Without even noticing it, unconsciously she had her eyes fixed about the daffodils, about where the little pink and white clouds used to appear.

She stared at the daffodils without even seeing them. She was so used to that for years and years that she was unconsciously waiting for the clouds and the usual consoling surprise behind them.

She did not know how long she had been there, sitting and looking straight forward, when she saw them at last.

A light stream rose up in the air from behind the daffodils. It was a very, very faint and uncertain stream. An indeterminate shape was delineated behind them.

Ann took a profound breath and looked at it intensely, trying to compress her sobs. So, as always, the charm was going to act and the pool, the magie pool, was going to console her from her own departure ?

Her eyes were immense and fixed firmly on the daffodils.

... The spectral shape behind the daffodils, did it move, or was it the fact of the breeze ?

... Did this spectral shape move really ?

... The shape was holding out her arms to Ann.

Suffocating with sobs, Ann got up ; her eyes were immense, and fixed firmly to the spectral shape towards the daffodils ...

The water shut up again above her body,

Up above in the blue sky, in the blue, blue sky, the small frizzed white cloud was playing hide-and-seek with the sun. It was such a delightful day in July ! ... 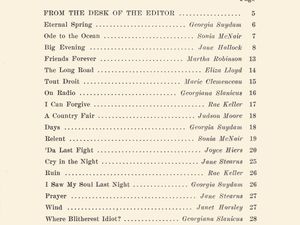 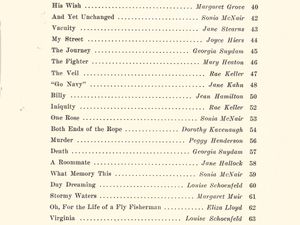 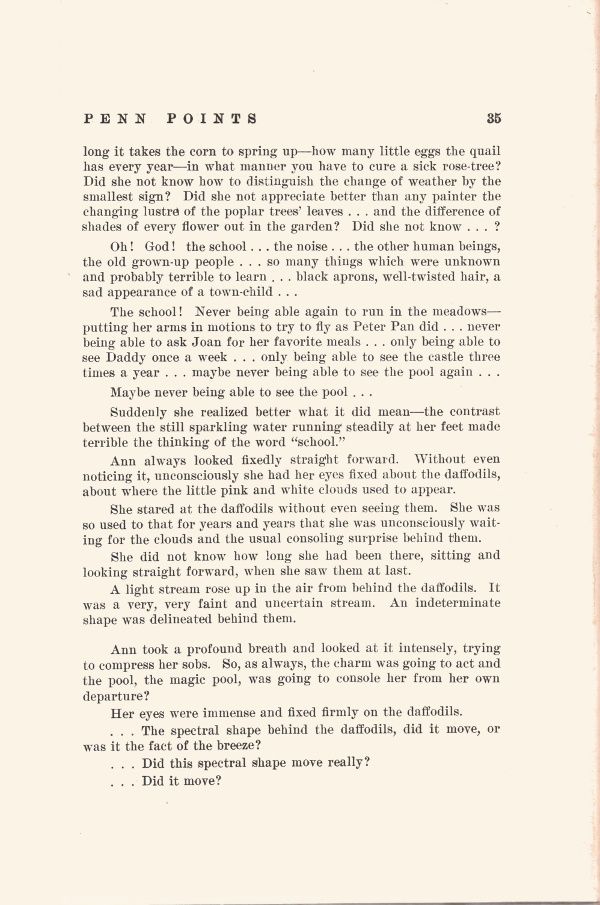